Menu
Menu
The power of social enterprises in confiscated assets

Camus wrote that in human history there have always been as many pandemics as wars. Yet when they come they always take us by surprise. Still on the same pages, he wrote that when this happens it takes away everyone’s faculty to love, because this requires some future, but in those situations there are only moments. If that is true, it is also true then the possibility of seeing the future comes from knowing that we are not alone, that other people are part of this future too. However, this also requires that there be the material spaces and conditions in which to do so. Concrete spaces that give equally concrete possibilities to the imagination, especially to individuals put in greater difficulty by their social context.

This possibility can be fostered by investing in inclusive forms of social economy that look toward sustainable development, whose purpose is not profit but the interest of the community itself. This type of economy, in addition to being able to withstand fluctuations and economic crises well, allows young people to learn about new opportunities for civic engagement, create spaces for work and reintegration into society of more fragile groups such as, for example, immigrants, people with disabilities, former convicts, isolated women or people with addiction problems.

In order to build a more cohesive and sustainable future for a Europe battered by the COVID-19 pandemic and by the consequences of the war in Ukraine, it is necessary for institutions to take the lead in reviving the principles of transparency, accountability and participation that underpin democratic values and that can empower young people to think about and organize a different economic, social and cultural model. The opportunity to leave a tangible mark on the territories, in and for the communities in which they live is the first step in banishing the narrative of an unchanging present and future.

The need to adopt new tools to engage citizens and for institutions to highlight their presence becomes more pressing every day. Criminal groups increasingly operate transnationally, adapting to contexts and exploiting legislative, judicial and cultural gaps. Seven out of 10 criminal organizations investigated in Europe operate in more than one State, and 40% operate in more than one criminal sector (SOCTA 2021). More than 60% of criminal networks active in the European union are involved in corrupt practices, and more than 80% of them use legitimate businesses as a cover for money laundering and other illicit activities. In the face of all this, only 1% of criminal real estate is confiscated.

All this was discussed recently in Palermo as part of the CROSS event marking the 22nd anniversary of the United Nations Convention against Transnational Organized Crime. The many guests who took the stage shared data, experiences and proposals on how to organize the fight against transnational organized crime, while the various associations involved in the event had the opportunity to introduce themselves to the audience, make and strengthen contacts.

Also present in this fresco were members of Europe Hub, which involves ten partners from as many European states active in the informal network CHANCE – Civil Hub Against orgaNised Crime in Europe. In order to target measures to support young people, the project proposes to address the problem of youth unemployment by applying the model of social entrepreneurship at local, regional, national and EU levels, with a focus on the public and social reuse of confiscated property, in the belief that precisely the tool of confiscation together with the willingness to allocate these seized properties to the community, can be the key to re-establishing relations between citizens and institutions, promoting the cardinal principles of participation, accountability and transparency, and finally giving concrete physical spaces within which the community itself can find the strength to imagine and build the future. 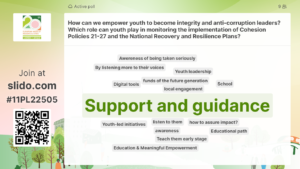 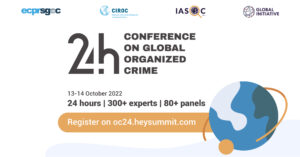